Which Is Popular Kimchi Nabe Broth? Here Is the Sales Ranking.

Based on Urecon’s ranking data (TOP 100), we have picked up Kimchi Nabe broth selling well at supermarkets. Popular products will be shown in descending order of sales.

The most selling product is Mizkan’s Shime Made Oishii Kimchi Nabe Tsuyu.
Stir-fried garlic and Korean chilli pepper with sesame oil and chicken oil and Gochujang and Lajiang provides its rich taste.
Not only Kimchi Nabe but also menu to finish up is great with this spicy and tasty soup stock. Easy-to-use straight type.

No. 2 Kimchi Nabe no Moto 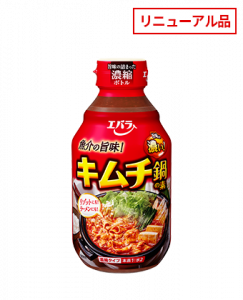 The second most selling product is Ebara’s Kimchi Nabe no Moto.
This is concentrated type liquid seasoning and easy to adjust its taste. You can decide how much you use depending on the number of people and preserve the leftover.
This has more authentic taste with seafood’s delicious taste and fermented kimchi’s flavor and its reputation is high.
Bottled one containing 300ml and PET bottled one containing 500ml are available. 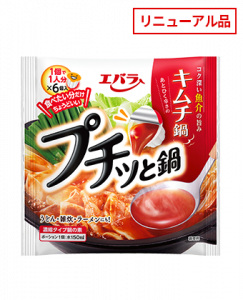 This Puchitto Nabe, Kimchi Nabe released by Ebara again is popular because you can make kimchi nabe even if it is only for single person.
Seafood’s rich and delicious taste and chili pepper’s spicy taste stimulate your appetite.
This liquid seasoning is convenient because you can use it not only for nabe but also stir-fried kimchi dishes and kimchi rice porridge. This is also recommended to use as seasoning when you do not have so much time. 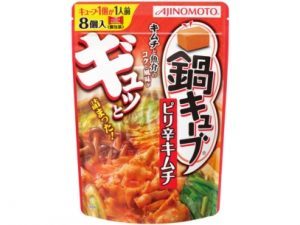 Nabe Cube, Pirikara Kimchi, just like Puchitto Nabe, is the soup stock for kimchi nabe with which you can make kimchi nabe even if it is only for single person.
This is cube type, solid seasoning, and you can cook without worrying about dripping or making your hands dirty.
Its taste made by adding kimchi and red miso on chicken broth addicts people. 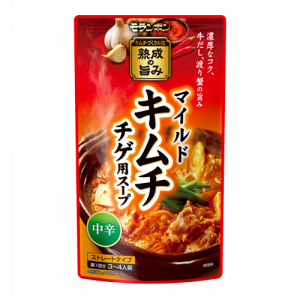 Mild Kimchi Jjigae -you Soup, Chuukara has pursued authentic taste based on kimchi served at Moranbong Honten, Korean restaurant.
Using carefully selected ingredients such as Shiokara of krill, fish sauce, ripen gochujang, and beef broth realized its rich taste.
Since it is not so spicy, it is good for family use. Its authentic taste will be accepted by those who love kimchi jjigae.

Have You Found a Good Kimchi Nabe Broth?

How did you like this article? The sales ranking of kimchi nabe broth at supermarkets has been shown.

Kimchi nabe broth on market has various types; straight type for one dish, concentrated type whose taste can be adjusted, and small portion type you can use as necessary. We hope you find your favorite one depending on your preference and lifestyle.

Let’s enjoy the cold winter time with kimchi nabe which warm your body from inside.

©Urecon powered by TRUE DATA
※Data: from September 1 to November 30, 2017.
※Each data is as of the date the Japanese article was released. Some products might have finished selling.
※Urecon (https://urecon.jp/) is publishing market trend data for the latest three months.