Warmer season is good for cold beer. Though you can enjoy the usual tasty beer, why don’t you try rich beer?
Luxurious premium beer is suitable for lively and fun time with your company such as barbecue and home party, and a gift for someone.
Here is the sales ranking of premium beer released by major breweries.

Which is Popular Premium Beer? Here is the Sales Ranking.

Based upon Urecon’s sales ranking data showing top 100, premium beer selling well at Japanese supermarkets has been picked up and is shown in descending order of sales. 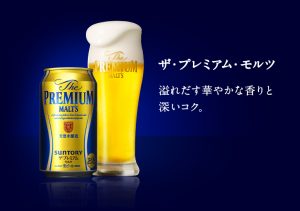 The premium beer selling the most is Suntory’s The Premium Malt’s. Since released in 2003, it has been fondly referred to as Puremoru and remained as a synonym for expensive beer.
The ingredients contain plenty of carefully selected materials including Diamond Malt which is rare in the world, European aroma hop and natural water.
You can enjoy authentic taste of beer with body, aroma and fine creamy foam.
Average price: 209 yen / 350ml 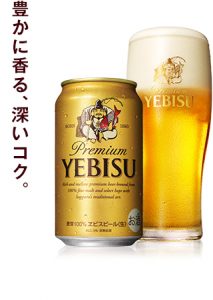 Yebisu is regarded as the origin of Japanese premium beer and still liked by many people.
The ingredients are only malt and hop without auxiliary materials and Yebisu Beer is aged for one and a half times as long as usual beer.
Its uniqueness is the body and sharpness brought by 100% malt and creamy white foam and clear golden color.
Its package has Ebisu, Japanese god of wealth on it is full of luck and perfect for a seasonal gift.
Average price: 210 yen / 350ml

No. 3: The Premium Malt’s Kaoru Ale 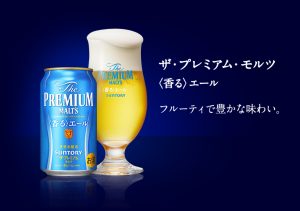 The Premium Malt’s Kaoru Ale is a premium type of ale beer which is preferred by Japanese people. Ale beer’s unique fruity taste and fresh aroma brought by top fermentation yeast. It is easy to drink and popular among women who do not like beer so much and young people.
Average price: 209 yen / 350ml 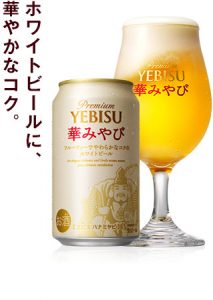 Yebisu Hana Beer is white beer which has used top fermentation yeast for the first time in the long history of Yebisu over one hundred years.
You can enjoy fruity aroma and soft body, which is good for your relaxing time after work or on days off.
Average price: 209 yen / 350ml 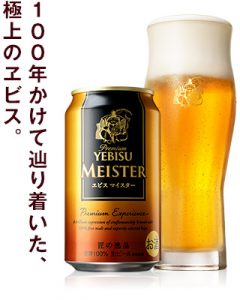 Yebisu Meister Takumi-no-Ippin is the beer of highest quality which has been developed by technical experts who have full knowledge of Yebisu after a lot of trial-and-error and severe evaluation.
Blending of aroma hop from Bavaria, Germany and royal leaf hop with great aroma provides fruitful aroma and sophisticated body.
Moreover, this package is wet-look can applied for the first time in Japan. Its unique appearance and feel perform the high class feeling.
Average price: 231 yen / 350ml

No. 6: The Premium Malt’s Master’s Dream 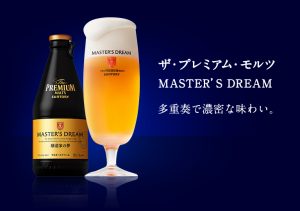 The super premium beer from Suntory, The Premium Malt’s Master’s Dream is the dream beer Suntory’s brewers have worked on for half a century to create the most delicious, impressive beer in the world.
In addition to the carefully selected ingredients including Diamond Malt, their unique technology and production method to draw out the appeal of those ingredients bring multiple and rich taste with body, bitterness, sweetness and aroma.
Its luxurious glass bottle is suitable for and popular as a gift.
Average price: 283 yen / 305ml 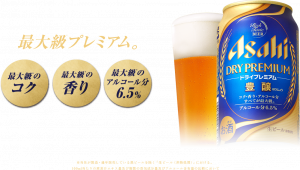 Have You Found Good Premium Beer?

How did you like this article? The sales ranking of premium beer sold at Japanese supermarkets was shown.
Premium beer with ingredients of high quality and special production methods is good for the days you would like to enjoy some luxurious feeling.
If you are not sure which one to take, please refer to this ranking and find one for yourself.

©Urecon powered by TRUE DATA
※Data from January 1 to March 31, 2018
※Each data is as of the date the Japanese article was released. Some products might have finished selling.
※Urecon (https://urecon.jp/) is publishing market trend data for the latest three months.