Which is Popular? Here Is the Sales Ranking of Dishwashing Detergents.

Based upon Urecon’s sales ranking data up to 100th, dishwashing detergents selling well at Japanese drugstores have been picked up and are shown in descending order of sales. 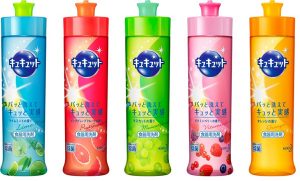 Kyukyutto series selling most at Japanese drugstores have unique rich foam.
If you wipe, the foam penetrates into the dirt and removes even greasy dirt quickly.
There are several aroma variations, and the three most popular are orange, muscat and pink grapefruit.
Average price: 132 yen / 240ml with container, orange 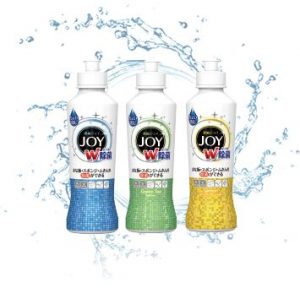 Picture from Proctor and Gamble

Jokin Joy Compact thoroughly removes even feed of bacteria with its Double Sterilization, Joy’s strong cleansing power plus sterilization effect.
It can eliminate 99.9% of bacteria in sponges, so if you would like to keep items essential for washing dishes clean, this is for you.
There are three fragrances to choose including popular saint citrus junos fragrance.
Average price: 131 yen / 190ml with container 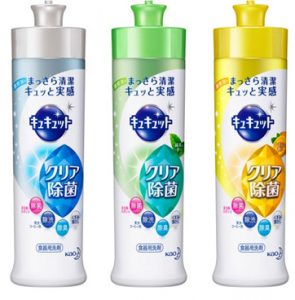 Kyukyutto Clear Jokin series are cost-effective, because these products not only cleanse but also eliminate bacteria, stains by tea incrustation, odor and somberness.
Citric acid discomposes stains of tea and coffee. Glasses and sink will shine.
Average price: 131 yen / 240ml with container 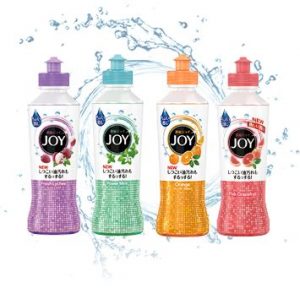 Picture from Proctor and Gamble

This familiar Joy Compact has strong cleansing power which removes tough grease quickly.
With small of amount of detergent, foam lasts long and you can wash a lot of dishes without adding more detergent. This is good for families.
There are four fragrances including the most popular one with orange peel.
Average price: 132 yen / 190ml with container, with orange peel 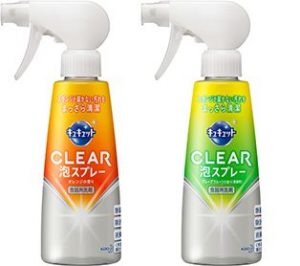 Kyukyutto Awa Spray is excellent. You can remove the dirt by only spraying on the dishes and rinsing.
This is especially good for cleaning kitchen items that are difficult to wash such as inside of water bottle, straw mag, and lunchbox.
Average price: 266 yen / 300ml with container, orange

No. 6: CHARMY Magica Antibacterial Plus 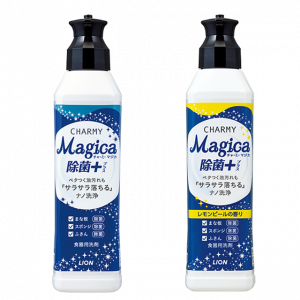 This is a nano-cleansing dishwasher detergent that makes grease slide like water off dishes and sterilizing performance is also added to.
This product disinfects not only sponges but also cutting boards and dishcloths.
There are two fresh fragrances: citrus green and lemon peel.
Average price: 140 yen / 220ml with container

No. 7: CHARMY Magica Quick Dry Plus 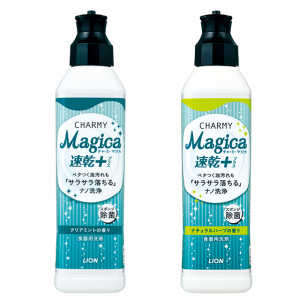 Newly released CHARMY Magica Quick Dry helps dishes dry quickly after washing for fast, efficient clean-up. Washing dishes will be less stressful and time-consuming and easier, so this product is recommended for those who are busy working or housekeeping.
Two different fragrances which make you feel clear finishing are available.
Average price: 140 yen / 220ml with container, clear mint 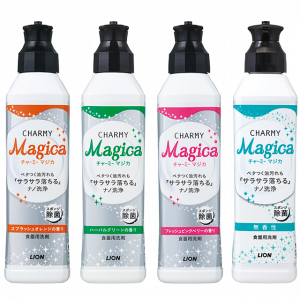 CHARMY Magica has been popular since it was released in 2015. Its nano-cleansing mechanism decomposes and slides the grease off like water.
While having strong cleansing power, this product is also mild to your skin just like CHARMY Mild and Awano Chikara Tehada Premium.
Non-fragrance type is also available. If you do not like fragrances, this is recommended.
Average price: 137 yen / 230ml with container, Splash Orange * As of January 2018 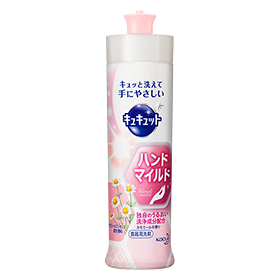 Kyukyutto Hand Mild is gentle to the skins with its unique moisturizing agent.
While keeping the skin’s moisture, it removes grease quickly.
Its chamomile aroma seems to make dishwashing fun.
Average price: 152 yen / 230ml with container 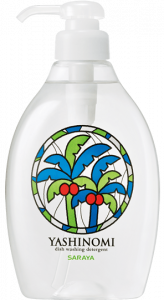 This is a long-seller product that has been loved since 1971.
This is a natural detergent with 100% palm based botanical ingredients and is gentle on the skin and environment.
This can be used for washing dishes for babies and even vegetables.
The pump bottle is easy to use.
Average price: 329 yen / 500ml Refill *As of January 2018

Have you Found a Good Dishwashing Detergent for You?

©Urecon powered by TRUE DATA
※Data from November 1, 2017 to January 31, 2018
※Each data is as of the date the Japanese article was released. Some products might have finished selling.
※Urecon (https://urecon.jp/) is publishing market trend data for the latest three months.